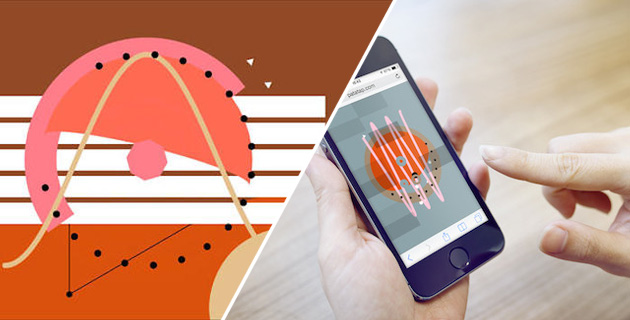 Patatap is a portable animation and sound kit. With the touch of a finger, create melodies charged with moving shapes. It’s easy to pick up, and there are a wide range of possibilities. Switch between multiple color palettes and matching soundscapes! Whether its on your laptop, desktop, mobile phone, or tablet.

Patatap invites creators of all ages to engage the mind and senses in a different type of creation process.The idea behind Patatap was to introduce Visual Music to a broad audience. Artists working in this field are different, but many are exploring a condition called Synesthesia, which one sense (for example, hearing) is simultaneously perceived as if by one or more additional senses such as sight. Hearing smells or seeing sounds are examples.  In Patatap, sounds trigger colorful visual animations.

Jono Brandel works with graphic design and computer programming. The results of this mixture vary in form, but usually have a screen-based component. He explores procedural aesthetics.Jono studied Design | Media Arts with a minor in Latin at UCLA. He went on to receive artist grants at cheLA and Fabrica. He is now a member of Within. His work has been showcased at the Tate Modern, Siggraph, FITC, and the Japan Media Arts Festival as well as featured in publications like The New Yorker and Wired Magazine.He has also had the pleasure to create work alongside Kimbra, Plaid, the Arcade Fire, and many others accompanying their music with moving images.

Lullatone is a Japanese musical duo based in Nagoya, whose music is characterized by an innocent, childlike quality and spare, lo-fi sounds. Although the group refers to their style of music as “pajama-pop”, it is commonly included in such musical subgenres as electronic and indie pop. It is influenced by such diverse sources as bossa nova, French pop music of the 1960s, children’s songs and musique concrète.

Companions are interactive wooden dolls that emotionally support kids in their everyday life.